According to a recent Stanford study, in 2017, 39% of relationships that started that year began online.

Nowadays you’re more likely to meet your partner online than anywhere else.

While perhaps the majority of relationships don’t begin online, that won’t be the case for long.

Eharmony and the Imperial College Business School did a bit of research recently and found that by 2035 more relationships will have started online than IRL.

Not only this but just two years later the majority of UK babies will be born to parents that met online.

Like it or not, online dating (including matchmakers like us here at emlovz ) is the go-to place to meet singles. If you’re single and not utilizing dating apps you’re doing it wrong.

Many guys are reluctant to download a dating app like Tinder and get to swiping. They feel as though dating apps are virtual sausage fests that just don’t work. And hey you wouldn’t necessarily be wrong.

The graph below provided by Statistica shows the gender disparity of Tinder users in the United States as of June 2020. 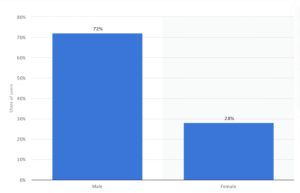 Imagine walking into a singles bar and seeing that 72% of the people there are men. You’d probably walk straight out of there, wouldn’t you?

These are the kinds of ratios men are dealing with every time they log onto a dating app.

To be fair, Tinder is the most male-leaning dating app on the market, but regardless of the app you’re using you’ll still be dealing with a gender disparity that isn’t in your favor.

To get noticed, you’ll have to stand out.

But how exactly do you do that?

Well, to answer that question we asked the kind of women that get hit up most often on dating apps, which online dating first messages they’re most likely to respond to.

We asked models, IG influencers, entrepreneurs, and actresses — basically the kind of women you’d be most likely to super like — their thoughts on the matter.

Here’s what they had to say.

“Hmm, I think something clever that makes me laugh, that you kinda know shows, the guy is funny or has a sense of humor. If you message something basic like “hi how are you” it’s like, meh 😑 haha, I would prefer a little joke or something like that.” – Amber

“I believe that a truly unique first message is very attractive, I like when they are creative! It can be something playful and flirty, I really like when they display confidence in themselves.”
– Anel

“Something related to my profile bio. Shows that he actually took interest in me by carefully going through my profile first.” – Pat

“Where did you go to school? What is your job? What’s a pretty girl like you doing here? Pleeeease don’t! Be original, read her bio and open the conversation showing interest in something she likes to do. Show not just interest in her but in what she have to say, genuinely wanting to read her reply. If the message is relax and funny, even better.” – Mara

“I would love to know more about you than your image.” – Jazzy 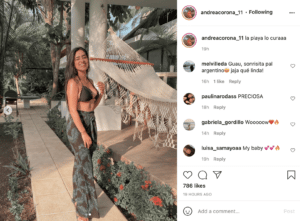 “Honestly the first message does have an impact but a simple hey could work, it just depends on how you lead the conversation after that!! It also depends on what you’re looking for, if you’re looking to date more than once (not just sex) and you really want to get to know the person it’s better if you try asking about them. To be honest funny messages or jokes to start a conversation aren’t really my favorite 😂 it’s true. We find guys with a sense of humor attractive but I think the perfect first message should be simple, I have to see that you’re really interested and want to talk to me I don’t know how to explain lmaoo, like you’re trying but not trying so hard!” – Andrea

[An opening message] should always be with respect and show an interest in you as a person. It could be a question about your hobby or something you like to talk about and of course, a compliment would be nice too.” – Ellen

“I think there’s no perfect message. Just don’t be so intense or direct (if you’re only looking for something physical).” – Melissa

”A message on a dating app should be only about when is the next meeting. Cuz I believe in face-to-face interaction, not just typing all your feelings on an app.” – Nayana

But ya know what, maybe you need a bit more guidance.

Emyli Lovz, is the co-founder & lead dating coach and matchmaker of emlovz.

Emyli and her team have helped hundreds of men find love online. Here’s what she’s learned when it comes to constructing the perfect online dating first message.

Emyli says the first message should do three things.

— It ends with a question (only 1 question at a time and no words after the question mark). It should be short (1 sentence is your goal) and outward-focused (don’t tell her about yourself–she doesn’t care YET but you’re going to show her why she should by standing out from the competition).

Contrary to what a lady or two has said above, Em strongly recommends never leading with “hey.”

Never use hey, hello, how are you, hola, how is your weekend going, etc. It’s overused and meaningless and won’t help you stand out from the crowd. The first 5 words of your message are precious real estate. She can only see a thumbnail of you and your first 5 words when determining whether to even open your message, read it, and then respond. Make her eye go to your message out of the 20+ messages she’s received that day by using words from her profile, her name, etc. I teach the exact step-by-step strategy in my coaching programs–which takes the guesswork out of figuring out what to say. Stop throwing spaghetti at the wall.

When it comes to dating apps, the age-old advice of “just be yourself” doesn’t exactly work either.

Most women will tell you, “just be yourself” but that won’t work because the dating apps are an artificial universe where hundreds of men vie for the attention of the most beautiful and sought after women. Simplistically, the market is saturated and you’ve got to differentiate yourself from the other duds who are also just “being themselves.” Of course “hey, hello, how are you” are intuitive, because they require zero effort. But that’s not going to work on a dating app where you’re competing with 1000s of other men. It would work in-person because no one approaches anymore but that’s because the market is not saturated in that case.

Realize that all dating apps, from Tinder to Hinge are superficial. To showcase who you are you’ve got to be proactive, bold, and smarter than other men.

At the end of the day, it’s all sales and marketing. You’ve got to understand what you’re up against to succeed and you have to position yourself strategically to win. But you can win, and I can show you how.

So what’s your next move? Do you feel comfortable messaging and getting a response on dating apps from beautiful and coveted women?

Emyli and her team of coaches & matchmakers can either teach you how to be successful on dating apps, or they can introduce you to super compatible matches.

To learn more simply book a new client 1-on-1 Zoom session with Emyli or one of her colleagues today.